“I finally cracked it.” (via TechCrunch)

By this time tomorrow Wednesday a lot of us will be talking about Google TV and if it’s the future of television or not. So I thought I would slip in a quick post about my experience with Roku’s video streamer since I received it last Friday. 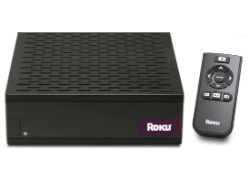 Roku just revised their line of media streamers so I used this opportunity to pick up a discontinued SD model from their eBay outlet store for our still SD TV in the bedroom. For less than $50 I could demo the user experience and decide if the Roku way was viable in the age of Apple TV and what is coming tomorrow from the Big G. And I wanted to watch Tekzilla and HD Nation instead of the late news.

So I’m happy to report it’s pretty compelling based on what they have now and what is to come (mostly Hulu Plus). Unlike the walled garden of Apple TV, the Roku is open to streaming a lot of content. Out of the box it has access to almost 80 channels but what makes it especially interesting to me is the ability to create private channels for niche content. Basically anything with an RSS feed embedded with videos of the right codecs are immediately playable making the Roku a podcast junkies dream. There’s even a slightly janky but usable Ustream channel for live streams when you want to check up on what Leo is up to right now.

This thing has a lot of promise and might convince me to forgo what Apple TV might be with apps in favor of what Roku does right now.

Years from now we will talk about living during the Great Releveling the way our grandparents spoke about the Great Depression. Times were tough, people tightened belts, many lost everything they had spent a lifetime building. But the Great Releveling will not be known only for gloom and doom but also for new and fundamentally different business models that emerged from this event.

The last time we had a Releveling of the sort we are now experiencing was over 500 years ago when an entrepreneur in Mainz, Germany invented a machine to mass produce books. His first product, The Bible, put a lot of monks out of work but also set the stage for an age of enlightenment that extended until just a couple years ago. Johannes Gutenberg democratized knowledge that eventually toppled the feudal systems of government that had evolved from hunting groups millennia before. His invention fundamentally changed the world and is still being felt today. Talk about a legacy.

I think the internet is doing this same thing right now. But the Royalty and Gentry are not the big losers but media companies who are not willing or can’t make the transition to a digital business model. Bob Garfield recently posted about this over at Ad Age and his main point — advertising doesn’t work anymore — is spot on. We are not living in a time where any business can rely on a single monetization strategy; welcome to the hybrid world.

You can see glimpses of the future now with services like Hulu, Amazon On Demand, Apple TV and Netflix. But each has issues to overcome before there is widespread adoption. On one hand, I like the simplicity of a monthly subscription that Netflix is selling. I can stream a selection of movies and TV shows to my Xbox or TiVo for a fixed fee. They even let me get DVD’s in the mail but this is a doomed model long-term and they know it. But I don’t have access to their entire catalog to stream at a moments notice which is it’s Achilles Heel. Amazon On Demand and Apple TV let you buy or rent content but their pricing model is too high. Why should I spend $4 to watch a movie when I can pick it up for a dollar at Redbox (or for free with their codes)? Hulu is an interesting idea — basically TV on the internet — but it will be doomed to failure since people will not tolerate more than just short interruptions in this post-TiVo world. They simply can’t run any more ads than they do now to retain viewers and I can’t imagine they are making much money for the short ads there now.

So how can information and entertainment be monetized?

I think it can only be a hybrid between advertising, it’s cousin product placement and subscription or purchase. So in this scenario a modest monthly service fee might be joined by short, “sponsored by” type product pitches. Hulu has most of this figured out today and should replace their interstitial ads in the programs with a straight-up under $15 a month subscription fee for unlimited, ad-free streaming. Amazon and Apple should adopt some sort of subscription model or just lower prices in order to be more than just a transitional service.

The days of broadcast and print advertising are over. The Great Releveling has begun. Get used to it.