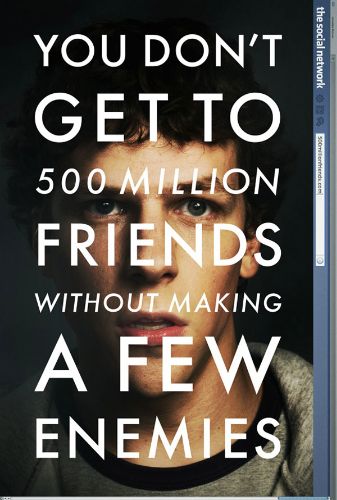 Much can be said about David Fincher’s film, “The Social Network”, which opened Friday. The screenplay by Aaron Sorkin is brilliant and is a strong contender for a best adapted screenplay Oscar. The acting is very good, especially  Jesse Eisenberg’s portrayal of Mark Zuckerberg and, surprisingly, Justin Timberlake’s turn as Sean Parker. But what was most surprising to me was how good a 2 hour Hollywood film about the internet could be.

The film tells the story of the birth of Facebook from it’s early beginnings in Mark Zuckerberg’s Harvard dorm room to his depositions for lawsuits in late 2007. Since it’s based on the book, “The Accidental Billionaires”, the narrative takes a somewhat negative view to Zuckerberg, but to Sorkin’s credit, much of his humanity is preserved. It’s clear that Zuckerberg is a brilliant hacker but also a very complicated individual and the writing, acting and direction wisely leaves much of the interpretation open to the viewer.

But what makes this film the best movie about the internet yet produced is not that it really gets into what makes Facebook or Web 2.0 such a game changer. In fact, it could be a story about any smart entrepreneur who took advantage of the opportunities in front of them. But when the film does show a glimpse of the computer screen the details seem mostly correct, which is usually where other films go off the rails with ridiculous rendered screens that have very little to do with computers or the internet. It’s those little details that keeps those of us who know this story satisfied.

So is “The Social Network” a great movie? No, but it is a very good one and worthy of your time to see it. It’s the second best film I’ve seen this year behind “Inception” (which I’m still trying to figure out) and is a tad better than Martin Scorsese’s fine “Shutter Island”.

Disclosure: I was given 2 free tickets to a pre-release showing of this movie as part of a group from SMBMSP.